Lubricating oil is an important resource and a petroleum base product. The high price of oil and objective of saving valuable foreign exchange has resulted in efforts for regeneration of used lube oil. Mismanagement of waste lube oil is a serious environmental problem. Almost all types of waste oil have the potential to be recycled safely, saving a precious non-renewable source and at the same time minimizing environmental pollution. Unfortunately, most of used oil is handled improperly. Some is emptied in to sewers for going directly into water waste, adversely affecting water treatment plants. Some is dumped directly on to the ground to kill weeds or is poured on to dirty roads or is dumped in deserts, where it can contaminate surface and ground water.
Disposal of used lubricating oil into the eco system creates environmental hazards. Toughlaws are being enacted throughout the world for the disposal of waste petroleum products and every genuine effort should be made for it’s re-use. In most cases, used oil can be re-used after reconditioning with or without the addition of any additives resulting in huge saving and conservation of precious oil. Thus regeneration, reclamation or recycling of spent lubricating oils has become an important process industry, adopting various techniques for oil purification.
Regeneration of used lubricating oils is based on the fact that, “Petroleum lubricating oil are almost indestructible”. We can say, “Lubricating oil never wears out”. Lubricating oils are impaired temporarily only because of accumulation during use or handling of contaminants coming from extraneous impurities and products of oil deterioration, which can be separated from the used oil by re-refining or re-conditioning. The treated oil, then, becomes almost equivalent to fresh / virgin oil.
The major extraneous impurities in the waste oil are:
1. Metallic Impurities
2. Non-metallic impurities
3. Water, moisture and untreated acid
4. Carboneous particles
5. Fuels, impaired additives and their by products.
6. Chemical contaminates
7. Polycyclic Aromatic hydrocarbons (PAHs)


In India, re-recycling waste oil industry is mainly an un-organized one. Although some public service units (PSU) also doing re-recycling but most of the market demand is furnished by the small scale industrial units (SSI’s). Most of the SSI units, till now, were adopting “Acid Clay Process”, which now has been dis approved by the pollution control boards, resulting in their closure until they adopt new certified process.
In the conventional acid clay process the used lubricating oil is settled or filtered after collection and is dehydrated. The oil is then treated with concentrated sulphuric acid to remove polymers, asphalts, degraded additives and other products of degradation. The sludge formed is allowed to settle and removed. The oil is neutralized with activated clay, at elevated temperatures. The clay also bleaches the oil and adsorbs certain impurities not removed by acid treatment. The clay-oil slurry is filtered to remove clay and other solids. If  the raw material contains more than one grade of lube oil product further processing may be required. 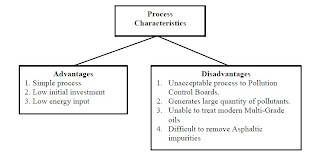 Spent oils, which have not deteriorated to great extent, are often clay contracted or treated with adsorbents without any acid treatment. They are generally given a preliminary settling, filtering, centrifuging or vacuum dehydrating treatment. Insulating oils and Transformer oils are often treated in this way.
In order to ensure satisfactory operation of any vacuum process it is essential that suitable vacuum pump be used. There is generally no single pump that meets all the requirements of the process. Combination of pumps is increasingly being used to optimize the process performance. Process condensable and non-condensable loads, air leakage loads, out-gassing loads and the working process pressures are the important parameters that influence the pump selection. Various empirical load estimation charts, and leak tests must be referred for the proper selection of the vacuum system. Some of the widely used pumps for vacuum process are described below along with their limitations.
These pumps use water or low vapor pressure fluid as the pumping medium. For this reason, the ultimate vacuum achieved gets limited to the vapor pressure of the pump fluid at the working temperature. Owing to the above, water ring Pump would stall at around 60 Torr abs. (700mm Hg) and their working range would be between 60 to 150 Torr (700-610mm Hg). They have further disadvantage of being energy inefficient, because most of the power is lost in friction losses of moving the pump fluid inside the pump. This restricts the water ring pump to relatively modest volumetric pumping capacities. Another disadvantage of ring pumps is that the working fluid often has to be treated before it can be discharged or reused as it contains the carry over of condensed product.
Posted by Everest Group at 2:16 AM 5 comments:

Distillation at reduced pressures is a widely used process in the chemical industry, specially used in extraction / purification of essential oils, deodorisation of Vanaspati / Vegetable Oils and purification & drying of chemicals. The advantages of low-pressure distillation process over Atmospheric pressure distillation are as under:
Reduction in stripping steam requirements for de-odourisation process of oil due to increased specific volumes (of steam) at low pressures and enhanced agitation & stirring of the oil.
﻿
Ideal Vacuum Pump :

Vacuum Booster is a Dry pump that meets most of the ideal pump requirements. It works on positive displacement principle. As its name suggests, it is used to boost the performance of water ring / oil ring/ rotating vane / piston and in some cases even steam ejector pumps. It is used in conjunction with any one of the above mentioned pumps , to overcome their limitations. Vacuum Booster pump offer very desirable characteristics, making them the most cost effective & power efficient alternative. The major advantages are :
cuum Booster
Posted by Everest Group at 2:00 AM No comments:

Everest Group
New Delhi, Delhi, India
Everest Blowers are manufacturers & exporters of Roots Blowers, Industrial Vacuum Systems, Dry Vane Pumps, Mechanical Vacuum Boosters & Acoustic Hoods.Over the years the company has expanded its technological base, bringing a wide range of products. Our Quality Management System confirms to the Quality Management System Standard ISO 9001:2008. Everest Blowers was founded in 1980 and was incorporated with a determination and commitment to deliver total quality in its ever-increasing range of products and services. We aim at strengthening our technological base consistently so as to deliver a flexible and dependable product line to our customers. We endeavor to provide robust quality in our products and services (before and after sales) that may ensure years of service in cutting edge and demanding applications.