Fresh water is an essential requirement of mankind for drinking, agriculture & Industrial purpose & is amongst one of the most important input for man’s survival. The rapid increase of world’s population and non uniform distribution of potable water has forced mankind to develop new techniques to generate potable water. Fresh water rivers, lakes & other natural sources are not able to meet the over growing demand of potable water forcing the scientists to look towards the sea to fulfill the need of fresh water. Sea water is available in abundance; however, its conversion to fresh water is limited & restricted due to high cost of conversion. The salt content in the sea water is very high making it unfit for human consumption and industrial use. Various processes are being developed to reduce the salinity of sea water so as to make it fit for human consumption and use. The most popular processes presently being used are Distillation, Reverse Osmosis & Electro dialysis. The selection of the right process depends upon the initial capital investment, plant capital, operation and maintenance costs etc.Scientists all over the world are constantly working on developing economical process so as to generate fresh water on large and economical sales. In this article the focus is primarily on the new process developed by Indian Scientists known as the process of “Low Temperature Thermal Desalination” (LTTD).
0.1 Million Litres per day pilot plant on LTTD process has already been commissioned and is in operation since May 2005 which was designed, fabricated & installed by Indian Scientists at Kavaratti in Lakshadweep. The plant has been working since then, generating fresh water from the sea water to meet the drinking water needs of people of Kavaritti Island, part of Lakshadweep. Sea water contains dissolved salts having a concentration of about 35,000 ppm which is too high for use by human beings. This level must be reduced below 500 ppm before it can be used. Distillation is the oldest and the most commonly used method of  desalination, where sea water is evaporated and vapours then condensed giving clean water. The latent heat of water is about 540 kcal/kg making the process highly energy intensive and conventional distillation columns prove uneconomical for production due to high input energy requirements. Various techniques are being used to recover the latent heat like multi effect evaporators, which can lower the energy requirement costs drastically. In LTTD method the energy requirement for the evaporation of water are taken from sea which makes the process eco-friendly and uses renewable source of energy. LTTD uses the temp difference which exists between the surface layer water 28°-30°C) & deep sea layer water (7°-10°C) existing in an ocean to produce potable water. 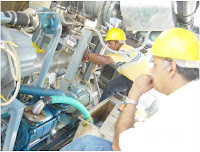 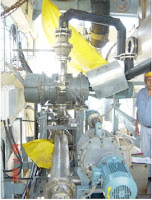 Everest has been proud to be associated with this project. Vacuum experts at Everest have designed and manufactured complete vacuum system capable of handling total non condensable & carry over water vapour load maintaining system pressure of 25 mbar. Everest leaders in Vacuum technology and manufacturers of Dry Mechanical Vacuum Boosters once again proved their capability to design, manufacture and deliver a vacuum system to meet the stringent needs of Indian scientists. We wish to thank our scientists for putting into actual use of concept, known for a long time but never
attempted before.


A 10 times larger project of 1.0 Million Litres per day (10 MLD) based on the above LTTD concept is already in advanced stage of erection & commissioning in the costal waters of T.N. Here, Everest has once again extended its expertise & has undertaken the complete design, manufacture & supply of the vacuum system. To improve, additional technique of de-aeration of sea water prior to its admittance in the flash chamber is planned which should result in higher efficiency, yield and low power consumption. All the Vacuum pumping system for de-aerator has also been designed and supplied by Everest. 1 MLD project based on LTTD technique is in the advance stage of erection & commissioning and hope by the time the article is published, final trials would be through. The above technology can extensively be used in many chemicals plants for treatment of effluent. In fact a project on similar lines is already in commissioning stage for concentration of Sodium Chloride solution in one of the large pesticide manufacturing units in India. The technical team at Everest, after being exposed to revolutionary technique of LTTD, gained valuable information and practical experience which has been put into commercial use by chemical and pharmaceutical Industry to economize production.
Posted by Everest Group at 4:17 AM No comments:

SCOPE OF SUPPLY
Posted by Everest Group at 1:40 AM No comments:

Everest acoustic enclosures are one of the most effective means for containment of excessive noise and for the insulation of the workers from the noise. Even where the silencers are used, they can only treat the air borne noise. The treatment of mechanical noise from the blower, motor etc. is beyond the scope of silencers. Thus, in order to achieve low noise levels, that are often statutory requirements, Noise enclosures/Acoustic Hoods are required.

SPECIFICATIONS
Design: The sound reduction enclosures are specially designed to reduce noise pollution to suit the local environment. These are engineered to take care of air intake and outlet, resulting in a pleasing and attractive design

Construction: The robust bodywork of sound reduction enclosures is due to its construction from preformed heavy gauge sheet steel section and its reinforcement with fabricated superstructure. Rubber gaskets are provided to all doors and external joints to resist weathering. The bolted structure provides easy removal of panels for maintenance of servicing of Blowers

Installation: The sound reduction enclosures are preassembled on a support frame and can be easily and quickly assembled at site.

SPECIAL FEATURES
Noise control: noise level reduction to the tune of 25 to 30% is achieved

Mobility: The enclosures can be easily shifted or transported

Ease of maintenance: Adequate space is available inside the canopy for easy maintenance

Elimination of civil work: Enclosures are suitable for open installation and hence require no separate building or shed

BIOGAS BLOWERS, based on Positive Displacement Rotary Air Blower principle, have been specially developed for pumping of Biogas. These are generally used in Biogas lines to boost the gas pressures to meet the burner input demand. These are generally vertical in construction, that is suction top and discharge bottom, so as to prevent any accumulation of corrosive matter inside the casing. Since they operate in closed loop, suction and discharge silencers are generally not required. Special material of construction, lubrication and sealing arrangements make them ideal choice for Biogas applications.
GAS BLOWERS - Special blowers, capable of handling different gases, are also available at Everest. Material of construction and constructional details vary to meet different gas requirements. For inflammable and toxic gases leak tightness is ensured. Basic designs are modified, depending upon the nature of gas to be handled and customer's requirements. Water jet injection cooling can also be provided to keep the gas temperatures low.
Posted by Everest Group at 11:16 PM No comments:


The process is approved by various Pollution Control Boards, is environment friendly and consumes minimal energy. 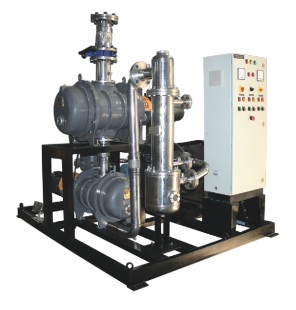 
Posted by Everest Group at 5:02 AM No comments:

Everest Group
New Delhi, Delhi, India
Everest Blowers are manufacturers & exporters of Roots Blowers, Industrial Vacuum Systems, Dry Vane Pumps, Mechanical Vacuum Boosters & Acoustic Hoods.Over the years the company has expanded its technological base, bringing a wide range of products. Our Quality Management System confirms to the Quality Management System Standard ISO 9001:2008. Everest Blowers was founded in 1980 and was incorporated with a determination and commitment to deliver total quality in its ever-increasing range of products and services. We aim at strengthening our technological base consistently so as to deliver a flexible and dependable product line to our customers. We endeavor to provide robust quality in our products and services (before and after sales) that may ensure years of service in cutting edge and demanding applications.